Kage Baker was an excellent photographer. She had her artist’s eye for colour,composition, lighting – all those things that make real art out of an electronic reproduction of what you see with your own, human eyes. She looked through the lens and saw more; and further, could get the machine in her hands to memorize it that way so other people could see it, too.

There was one Faire, very early on, where all the pictures Kage took have a line of fallow gold across the top – which was the edge of her solana, keeping the sun off her face. But she got that out of her system pretty quickly, and anyway switched to a wimple and a felt hat – so the special effects stopped. After that, she took great photos.

Not me. I am a wretched camerawoman, even with the near-miraculous cameras now available to those with no art in their hands or eyes. Nor am I often moved to memorialize what I see, preferring instead the biochemical miracles of my brain to house my memories. Besides, most of the time at any given Faire, I was in character: and whipping out a camera was a dreadful sin to characterization. One I never committed.

Last weekend, though, I took my nifty red (RED!) digital Nikon to see what I could see. And catch. Turns out the camera works fine, and I am still a lousy photographer. I stand too far away from things, and I am no judge of light. My taste isn’t bad and my hands are steady; though nephew Mike informs me pityingly that would not have been a problem, as the camera has some extraordinary gimbal inside to compensate …

Nonetheless, I have selected a few photos to share, Dear Readers. I did promise you a glimpse of the Wizards Rainbow.

For those who have not read Stephen King’s epic fantasy series, The Dark Tower, the Wizards Rainbow refers to a series of coloured glass globes: tools of sorcery, all, and of augery, and of sights of the past and future. It also refers to a stained glass window depicting same in the childhood bedroom of Roland Deschain, doomed gunfighter of Gilead.

I love these books. I just read the most recent (finished this morning about 2), and am bout to embark on re-reading the entire series. I am in a reading vein … and I urge these books on everyone I like, because that is the self-serving mania of the bibliophile; the greedy demon in our brains wants to spread and propagate! And I like all of you he he he.  Hence, I will try to infect you with these books – be warned!

Also, Kage loved coloured glass. It has long been the habit of the glass vendors at the Renaissance Faire to display their wares in the sun, to show them off to best advantage; as, I suppose, all outdoor glass vendors do. Anyway, it’s always been a magical sight – the glass in the sun, spreading rainbow wings on the dusty ground so that one walks through every-changing spectra as one passes by, through illumined landscapes and eldritch gardens, cast like rivers of light on the earth. Kage loved that. My poor, few pictures tried to catch it to share with all of you.

My words don’t do justice to the glory of the glass, either. But I must admit that when we passed through the glaziers’ booths, my heart rose and sang for the beauty on display – just like in the old days of Faire. At least, until we passed a vendor loudly crying his wares in unadulterated American, and describing with perfectly modern elan the extra added attraction of his particular glass: solar panels that make them turn in the sunlight.

In the old days … he wouldn’t have been allowed to shout that admission into the ears of Faire. Heck, he wouldn’t have been allowed to sell them, nasty modern things. The art of the glassblower – which, for your general information and literal enlightenment, was largely reborn at just such archaic festivals as the Renaissance Faire – depended on the sun and the wind to enliven the melted sand and pigments. Solar-powered hummingbird feeders belong at the County Fair or Costco. Not in my childhood faerieland.

But, hey, I knew I’d find things like that when I went there. The glass was still there, at least; the Wizards Rainbow, burning the in the hot morning sun, every curve and globe and goblet another world brought to life by the light.

Oh, it’s hard and painful to get old, Dear Readers. Not just for the lovely things that die and change and vanish – but for the ones that live on, and are different. Ah, well. A wise and dear friend has told me that the measure of aging with dignity is how we decide to live with loss. He was right. And the colours are still there. 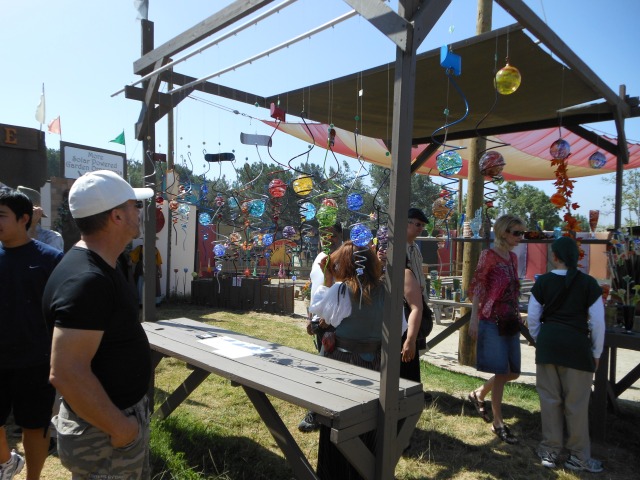 2 Responses to Some (Poor) Photographs