Kage Baker distrusted most technology as a matter of course. She gave her heart to those she did trust, trusting them as child trusts in the mysterious powers of her blankets when confronted with midnight monsters. They always worked; they had to. Failure was not an option, and no explanations would excuse it.

The increasing number of ways to screw up online postings would have driven her nuts.

I don’t place such emotional trust in my machines, because – well, they’re machines, you know? Kage had a more universal interpretation of sentience and personality, I think. I find I don’t blame the machines when something goes wrong. But it’s still annoying.

Pursuant to this line of thought, I’ve been unable to post here the last several days, Dear Readers. Most days, I have not even been able to sign in –  I’ve gotten error messages, been informed that the site was taking too long to open, been notified that the URL was too long to process. Which is a definite WTF … I’ve gotten caught repeatedly in circle jerks that kept just taking me through the sign on process partway, and dumped me back at the beginning like a Helter Skelter.

Well, I have just discovered that poor WordPress  has been under a massive cyber attack for the last few days. Some folks have been able to get on – some have not. The differences seem to be a product of users’ individual browsers, use patterns, security and other ancillary software. Something about mine has combined with the attack to keep me out of the site altogether.

So I guess I am safe. Wordless outside the gates of communication, though; throwing rocks with hastily scribbled notes on them over the guardian walls. Of course, I have needed the time to work on a story, so that is good, at least. I guess.

Supposedly, though, all is well now. To cheer you all on through your day, here is picture of brand-newly discovered bat. He looks like a tiny badger; or a winged gremlin.  Niumbaha superba is his name. He made me smile. 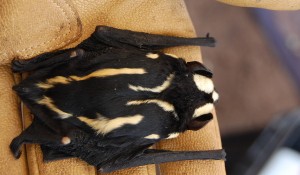