Kage Baker was always filled with energy at public appearances. Glowing, fizzy, incandescent energy. I think she had an internal Van der Graaf generator that reacted to the exterior flow of energy to fill Kage herself with glowing sparks. Maybe it was in her hair. 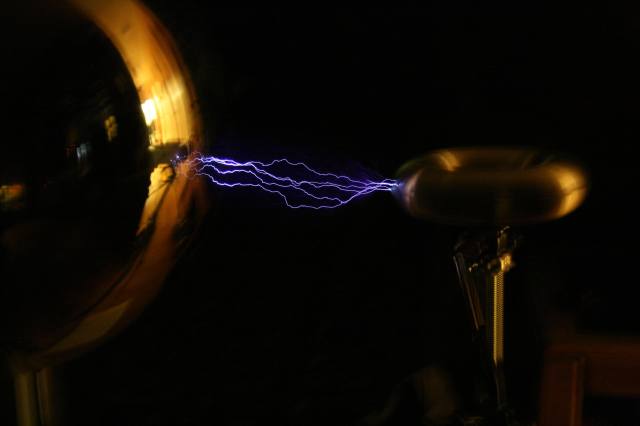 There was definitely an energy exchange. Something flowed into Kage from a crowd listening to her; something commensal flowed back out and connected to every pair of eyes and ears. Watching her during a reading was amazing – she did all the voices, she did the appropriate hand jive, her very stance and posture would alter to make her taller, shorter, older, younger, male or female. As the excellent writer Rick Bowes once commented, “Last night, Kage Baker and I did a reading at the South Street Seaport Museum. Well, I did a reading. Kage gave a performance.”

Once at a Westercon (I think) Kage forgot the print out she meant to use in her reading. Faced with a packed meeting room, she took a deep breath – and made one up on the spot. It was riveting. People crept in from the corridor to sit on the floor and cluster along the walls, lured by the power of her voice. After a particularly fraught exchange between a sailor’s wife and the incarnate Sea, Kage paused – looked up at the ceiling – and said: “I’m not sure who wins yet. You’ll have to wait for the story to come out.”

The audience howled liked frustrated wolves. But they knew they had seen something amazing, a story literally being born from a writer’s mind. It became “The Two Old Women.”

That energy between Kage and her audience thrilled and exhausted her. She ran with her needle pushing red all through a Convention; then she collapsed on the way home. She’d lie back in the passenger seat and analyze the entire experience as we raced along, hands waving languorously in the air like kelp fronds, worn out to the tip of her braid.

Part of my job was to not be that devastated – whether by a Convention, a camping trip, or a weekend at Faire, the timing called for Kage to be a sessile organism while we got home. Then I would vegetate once we got the luggage indoors – Kage, re-energized, got to unpack and make dinner. Or at least think of something for dinner, which was a task usually completely beyond my powers after a long weekend and a protracted drive; I just hoped something edible would deliver itself to my lap, and maybe feed itself to me …

Today I drove home from BayCon, from Santa Clara in the Bay Area. That trip can be a mad adventure, running for the border with what you can carry and listening for the hoof beats and howls behind you … or it can be so almost automatic you suspect you’re running on rails. I left early enough in the morning to miss all traffic on both ends; starting in Santa Clara and finishing in Los Angeles, you can end up driving from the  Great Dismal Swamp into Br’er Rabbit’s Briar Patch.

But it was a peaceful; nay, an idyllic drive. The light was crystalline and revealing, spot lighting every swelling apricot and almond on the passing orchards, every line of poppies and lupine on the hills where the oats have gone to golden beards. There were sheep and late lambs, cows and late calves; I saw a hawk sitting regally on her massive fortress nest high in a roadside oak. Infant orchards still in white swaddling have spread over yet more slopes, and corn and sorghum are rising tall into massed green armies, bristling with spears.

And I was not, quite, exhausted – tired, yes, but still buoyed up by the energy of the Con. Maybe I don’t burn as high or insanely as Kage; pretty sure I don’t, actually. But I burn high enough to power my sojourn on the road, and maybe pick up a hitch-hiking story along the way …