Kage Baker always said she could feel her blood thinning in the Spring, thickening in the Fall. I always said that was nice poetry but lousy biology; but as Kage also believed for most of her life that raw potatoes caused trichinosis, she dismissed my cavil as mere persiflage.

But I have really a felt a thawing and a stirring in my blood these last few days, and I think I am actively pupating. Kage would not be surprised. She knew she was right.

She was also of the fixed opinion that one can always be reborn. In fact, she was fairly sure that there was no way to avoid it; it happened all the time, as far as she was concerned. All one could do was to:  First, be ready to change at any time; and Second, have a good grasp of who you are to start with, so as to reduce the inevitable period of confusion.

She held a similar opinion regarding the Apocalypse. Every Apocalypse. According to Kage, the prophecies of the end (s) of the world (s) were always true. And they happened, every one of them. It was just that almost no one was equipped to notice, because they got renewed, too; or because very few people were  wired to notice; or because the few people who did notice covered it all up as quickly as they could.

When I inquired as to the provenance of this idea, she said she learned it from an interview with Jim Morrison – in, I think, a 1964 issue of that renowned End Times journal, Tiger Beat. Another time she claimed she had heard it from the yoga instructor who rented one of the rooms of the ex-wildcat movie studio in the house next door.  She blamed it on Mother Shipton, once; and on the Rosicrucians, too – although I don’t think she ever knew any.

In the end, Kage used the idea to disguise the End of Time, the Great Silence, and lots of peculiar natural disasters; and so put paid to the Company while no one noticed. I might have attributed this to desperate fatigue as the original trilogy expanded into 7, 8, 9 books. However, Kage first expounded the idea when we were 14 and 15, eating Smith Brothers Softish Cherry Cough Drops while hiding under the curtains of grape ivy that veiled our decaying Alma Mater … so it had been on her mind for a looong time.

That was at Immaculate Heart High School. This week, the junior bacchantes of that student body are leaping for joy around the leftover May Day poles, celebrating our mutual alumna, Meghan Mountbatten-Windsor nee Markle. Talk about renewals, about the world totally changing and no one noticing! That little boy is an astonishing new chapter in a millennium-old book, and only the immediate participants have really noticed. But the little May Sussex boy is really a firedrake across the skies of British history, as bright and blazing as his Dad’s hair.

New times, Dear Readers, new times. New worlds, new magics, new flowers coming up through the winter thatch of the front garden – what was a lawn is now a waving sea of (mostly) oats. It’s green and silver and it moves like the sea, whatever it is. The oats and the wildflowers are keeping company with tomatoes, poppies, roses, a baby maple tree, a floral fountain and the stone Crocodile that swims through the lower lawn. And of course, the whole place is alive with squirrels and finches, raccoons and ravens, looking to make the next generation.

I feel like I’ve been taking a year off dead for taxes purposes. But now, I am alive again. I can actually reach above my head with my right arm, which has been a magic trick completely beyond me since last May. To celebrate, I replaced the laptop I fell on last August, and now I can once again type with two hands!

My desktop is still difficult of access, due to a year of not being able to sort or use my yarn stash; skeins of wool and linen, feral needles, are all still obscuring the desk. But I have at least partially emerged.

For your amusement, I give you as a gift the cocoons of the  orange spotted tiger clear-wing, which is none of those things – it is a butterfly that somehow spins a cocoon of silver. I also commend to you the exquisite Luna moth, into which I wish I could pupate; and the little brown bat, which is what I suspect is closer to my style.

The moral is that you never know what will hatch out of what, or what you will become, or what cycle of life you are actually illustrating. Kage may have known – I know I never will.

But all choices have their charm, Dear Readers, eh? 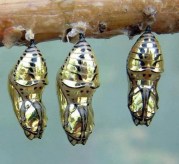 I am Kage Baker's sister. Kage was/is a well-known science fiction writer, who died on January 31, 2010. She told me to keep her work going - I'm doing that. This blog will document the process.
View all posts by Kate →
This entry was posted in Uncategorized and tagged BATS, MOTHS, NEW BEGINNINGS, pupaS, Spring. Bookmark the permalink.