Time Slip On A Moebius Strip

Kage Baker did not believe in linear time. The direction of the Arrow of Time was, she firmly averred, a personal interpretation of events.

That was a view she held long before she began to write time travel stories, and probably the weightiest factor in her decision to do so. The Universe, she was sure, did not behave as it was implied to behave, nor was the common inference of its directionality correct. Linear time, according to Kage, was an artifact – compounded of the fact that human brains, eyes, and story-telling sense face forward, and the demand of society that everyone face the same way all the time.

“We think that way because we’re told how it works when we’re too little to decide on our   own, ” she said. “Time is the only thing we don’t look at as we  walk toward it.  All we ever really see is the past, after all – we go blind into the future, so we’re really going backwards! What would we think about time if our eyes were in the backs of our heads?”

“We’d call the backs of our heads the fronts,” was my opinion.

Mind you, Kage did not go blindly into the future. Not wholly. She was one of those people who sometimes know what has not yet happened – but is likely to. I don’t make any claims for her abilities: I have no idea if she had The Sight so beloved of fantasy writers, or was just an extraordinary observer and guesser. And since Kage was an extraordinary observer and guesser, it may have been a moot point anyway. Kage didn’t know either. She would look you solemnly, and tell you: “I got the Sight – I’m psychotic.”

She found it amazing and hilarious how many people heard what they expected, not what she’d said …

Time for Kage was a vertical Moebius strip. You could follow it up or down; it made no difference, because eventually you’d wind up where you started. And by necessity, you’d spend half the journey somewhere else (the fabled Other Side) than where you meant to be. You would only stay on the one surface by hanging off the edge and dropping though the void to another section. Of course, if you fancied that kind of action, you could just leap up, down or even across wherever you fancied. You’d have a hell of a time navigating, and you might never be seen again in the Fields We Know, but, hey – it’d be an adventure.

This is how Dr. Zeus does it, of course. Although, also according to Kage, they stole the idea from the little stupid guys and don’t actually know how it works. They know how to make it work, in a limited fashion, but they don’t know why. They think they’re time travelling, but all they really understand is how to push the Big Red Lever …

A lot of human endeavour, Kage felt, was like that.

One of the common consequences of this structure of Time was that you could slip pretty easily. You could get distracted, or pushed off course by a sheer wind or a rip current or too much rum; you could fugue out and end up in the same place but two hours before or after your last recollection. Most people, Kage said, are not equipped to notice this very much, because they’ve been trained since infancy not to look in the direction that would show them their aberrant footsteps. So they mostly ignore it. But it happens all the time, a natural result of running as fast as you can back wards into a future you cannot see.

Unlikely as it seems, Kage found that comforting. It gave her a reason to apply to certain phenomena of time and focus that bothered her; as it said in her favourite play, it ” … gives to airy nothing/ A local habitation and a name.” She liked knowing where she was – in fact,  once she had assigned sufficient dimensions and the proper temporal directionality to the Universe, she could hardly help knowing where she was. And that was comfortable.

My peoration here is to explain what happened to the month of July: it and I fell off opposite ends of the Moebius strip. Where it’s gotten to, I’ve no idea. But where I have been, things have been too hot, too humid, and my heart has been beating too slowly. A lifetime of high blood pressure has abruptly reversed, and I am now exhibiting the internal pressure of last year’s pool float: only one eye popped out, my ears shrivelled, my overall demeanor inclining to the flat …

But! Whatever Sargasso Sea has held July in unwilling stasis is coming to an end! Tonight is Lammas Eve (Juliet’s birthday, you know), and tomorrow is Lordly August come to town clad all  in gold and amber. I’ve gotten a story actually submitted to Asimov’s Magazine, and tomorrow, I will submit a second one to Fantasy & Science Fiction. F&SF doesn’t usually take e-submissions, but they will do so for August, as they are entertaining a guest editor – who doesn’t frighten me quite as much as the redoubtable Gorden Van Gelder. Anyone who would like to light a candle on my behalf, Dear Readers, will be abjectly thanked.

I have acquired a writing hat (see below, for those few who didn’t see it loudly boasted about on Facebook). Story ideas are literally filling my dreams. I have chiselled through an enormous writer’s block with the traditional sharpened spoon, and am actually writing again. My CPAP mask has restored peace and satisfaction to my sleep, and given me the hope of scaring any burglars we might get into epileptic seizures.

Wherever I’ve landed on the Moebius strip, it’s no longer July. Things could be a lot worse. 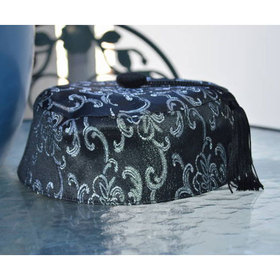 2 Responses to Time Slip On A Moebius Strip