Kage Baker loved Midsummer. What’s not to love, after all? Midsummer, St. John’s Day, Litha, the Summer Solstice that marks the longest day and the shortest night of the year – it’s the very peak and pivot of summer.

And summer was Kage’s own season, daughter of the Sun Triumphant that she was. Midsummer’s Night and its Eve, she happily dedicated to Shakespeare. She always tried as hard as ever she could to spend it in that Wood Outside Athens, regardless of whether it was in the eucalyptus groves of the Hollywood Bowl, or the long ballroom beach at Pismo. But her heart was really given to the daylight.

By this time, most years, the morning marine layer could be depended upon to have burned away by afternoon – long golden twilights happened, softened by the remaining mist into a false clarity that made the hills look miles deep. It’s nearly 8 PM as I write this, and the sky is still a well of light. It’s blue in the east, lilac and orchid in the west, where the setting sun is dissolving into silver-gilt smoke … Kage always wanted to see this day and night in England, where all the stories of our childhood promised us sunset at 10 PM and a twilight that lasted half the night …

But California’s pretty indecision between the desert and the tropics was enough. The particular loveliness of California’s oak savannah is made for Midsummer; the wild oats soak up the daylight and breathe it out again into the evening, so the shadows beneath the trees are full of faerie luminescence, and smell of spices and rum. Kage would eat hoarded plums, we’d roast beef in the back yard and eat with our fingers, and sit by the bonfire as the stars pricked out late in the sky, drinking beers … us, drinking the beers. Not the stars. Or maybe them, too; who knows?

Plums, apricots, Italian ices (Kage had permanent dibs on the cherry ones), bomb pops on those few Hollywood summers when an ice cream truck braved the vertiginous Hills. The red, white and blue ones are good, but the fudge Bombs are simply amazing, and you can never find them in the grocery store. They have to be bought from a diesel-fuming truck in the last light of the longest day, with frost gleaming blue on their wrappers.

So, tonight is Midsummer. And it’s also the Summer Solstice, which makes it the beginning of summer. I know of no explanation for this mystery, except for a paradox of Time. No one remarks on it, no one worries, no one cares – because Summer is Timeless, and while it’s going on, it’s also eternal. We are all dancing in a ring,  on point at the border of Forever; twirling on one foot on the edge of luminous twilight, of a night that never really falls.

That’s the natural law. I hereby declare it. 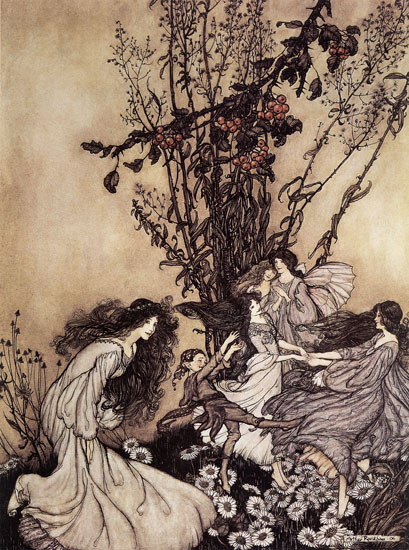