Kage Baker did not believe in luck. Everything, she believed, had a purpose. She carried this to some weird lengths, in my opinion; but she said it made her feel better. It wasn’t paranoia (She insisted on that …), it was proof that there was form and structure to the Universe.

Eleven or so years ago, while we were sitting on the lawn of the Ragged Point Inn, contemplating a ruinously delicious lunch and looking at the broad Pacific, a tiny round fox-red puppy ran up to us. It had ears like satellite dishes, no tail, huge griffin-like paws and nothing much in the way of legs. It came up to Kage and grinned at her.

“Yes,” said I, melting into a puddle of squee.

“Kimberly needs one of those,” Kage decided. “We should find her one.”

Kimberly had long desired a Corgi, which Kage knew. And where Kage and I lived, in Central California, there are an amazing lot of Corgis. They seem to spread out from the epicenter of Cambria (surprise!) and can be found everywhere between Big Sur and Pismo Beach. Less than a year later, Kage found an ad in the newspaper she worked for, and I drove Kimberly up to acquire  the amazing Dylan Griffith.

It was love at first sight. She was Mom, he was utterly hers, and he tried to spend his life in her lap.

Today, Dylan died.  He began throwing up yesterday – couldn’t stop, couldn’t eat, couldn’t even keep down water; though he tried heroically. There was no warning or other symptoms, and he was cheerful and happy between puking fits.

But dehydration can be fast when you only weigh 45 pounds. We rushed him to the vet – the vet said he was in renal failure from an unknown but massive bacterial infection in his kidneys; and there was basically nothing that could be done. Too much, too fast, and even if he could be saved, his quality of life afterward would be bad.

No one deserves to die in agony, especially a loving, trusting little person who has shared a life of happiness. Kimberly couldn’t let her good dog endure it with no hope. She took responsibility for sparing him that, making the hardest and most painful decision of any dog lover’s life.

Dylan was snug and safe and pain-free in her arms when he died, wrapped up in a beautiful blue blanket. We petted and talked to him for a long time, and he was quite content while the sedation took him away. I held his paw.

Then we tucked the blanket around his nose, because that was how he liked to sleep, and came home.

There may be no accidents – Kage could have been right, she often was. But there is far too much pain. Nothing since Kage’s death has reminded me of that more than today. Hold tight to every one you love, Dear Readers. You never know when the Universe will take them away, by accident or on purpose. 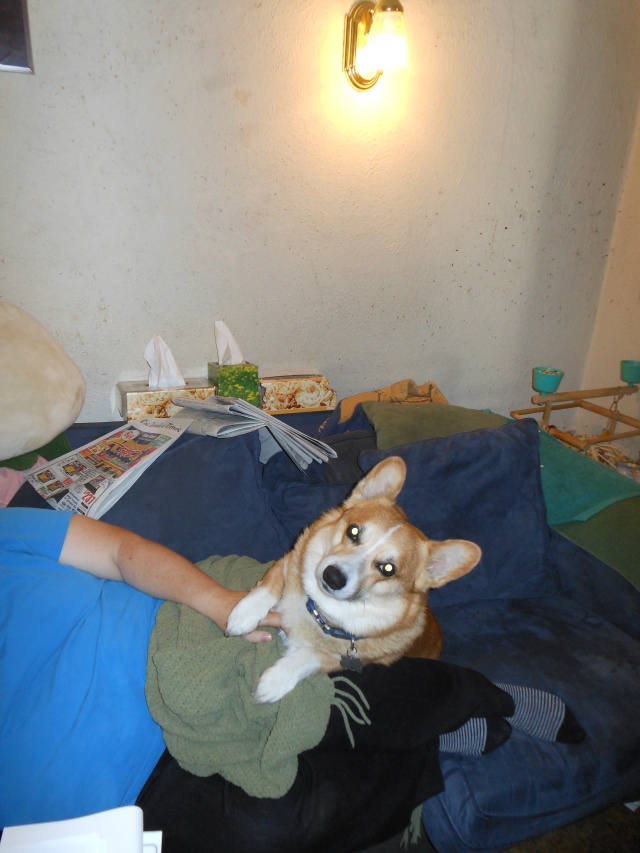 I am Kage Baker's sister. Kage was/is a well-known science fiction writer, who died on January 31, 2010. She told me to keep her work going - I'm doing that. This blog will document the process.
View all posts by Kate →
This entry was posted in Uncategorized and tagged Corgi, Dog Days, Dylan, kage baker. Bookmark the permalink.

12 Responses to The Dog Days II