Kage Baker was madly prolific. The main reason was, her brain was continuously on the boil.

She had ideas the way most people have itches – constantly, often inconveniently, frequently in embarrassing places. I remember her getting totally carried away one afternoon, over sundaes in an ice cream parlour in Pismo Beach; acting out plots and characters with all the voices and compass points, scattering chocolate sauce with a wind-milling arm. And though we were fairly loud and giggly, the waitress was oddly attentive and amiable – even solicitous. It was only as I paid and we left that Kage suddenly looked stricken and said to me, “Oh my God, she must have thought I was mentally disturbed!”

It’s perfectly possible. Poor Kage was dreadfully embarrassed, though, and we never went back to that ice cream parlour. It went out of business in a couple of months; which is rather a stunt in a beach town. Coincidence? Who knows? I wouldn’t be surprised if Kage had cajoled some elder god into dragging it through a crack in the walls of the world …

Anyway. My point here is that she had so many ideas, all the time, that it was all she could do to handle them. She made notes, when she could find the time: but like a woman with several toddlers at once (like her own mother, ha ha for cosmic justice …), it was hard to find a half hour to write just one set of ideas down. They mostly stayed filed in her head, where they ran and shouted and flung things all about.

(No wonder that waitress thought Kage was a bit doololly. Just like a lady with a kindergartener on a leash, twin babies in a giant stroller, and an 8-year old raiding the gumball machine.)

Kage did leave me a lot of notes. And she poured all she could into my ears, to settle into my poor brain until I  was the one who had to think of something to do with them. I’m nowhere near as fast or prolific as Kage was. But I do manage to muddle along.

Now that the new year is well and truly begun, it’s time to start bugging people. My agent has had some stories for months; a publisher has an entire novel I cajoled them into looking at in August. I need to contact them all and make small piteous noises of inquiry.

In the meantime, though, I have had an idea for a collection of stories, about the less glamorous departments in Dr. Zeus’ business. You know, bugs. Unattractive mollusks. Stories about ordinary books: not deathless literature, but cookbooks and gossip broadsheets. Weird humans who essentially accomplished nothing but to evolve in isolation. Really small animals.

I have one story completed, about blue squirrels. Other things, too, but it stars blue squirrels. The operatives who deal with them call themselves the Teddy Bear Squad. And recently I got down just the notes below – which aren’t a story yet, but are on the way. I include them here to test some waters, to see what you, my Dear Readers, might think of the various ideas. Don’t worry, you can tell me if it sounds ghastly. I am grateful just to have a chance to talk it over with people.

Notes for a story about the Division of Technically Mythological Creatures, aka Parazoology.

Not all cryptids are magical. Some are as real as pugs, and often more useful. (Not a long stretch …) Also, not all of them are huge. Animals that are not outsized tend to fall, alphabetically, between Ba and Mn, filing-wise. They are usually 3 to 6 feet in their primary dimension.

This is a coincidence of interest only to Company statisticians – a discipline only known to Operatives, since the Board neither understands nor gives a shit – and the Operatives who hunt, catch and breed them. Oh, and the techs who have to build cages.

This leads us to the Leopard Eel, presumed to be a myth in Alabama and Florida, until live ones were caught in December of 2018. By a mortal hunting for turtles. They turned out to be very aquatic unknown salamanders, with extravagant frilled gills, spots, only front legs, and blue eyes.

They are slightly-too-soon escapees from the Parazoology Division (Louisiana Office), which had been keeping the things in their bathtub because local floods have compromised their breeding tanks. The Company is keeping them safe and trying to breed them, because of their unparalleled ability to filter out poisons from wetlands. They don’t breed well in captivity. The Company Operative had been working on that, and had finally hit on transforming them from from ovoviviporous to straight up external fertilization. Then they escape, and in the wild, they suddenly breed too well … what do you do with thousands of giant salamanders that filter toxins through their livers, breed like rabbits, are not cute, but are 3 feet long? 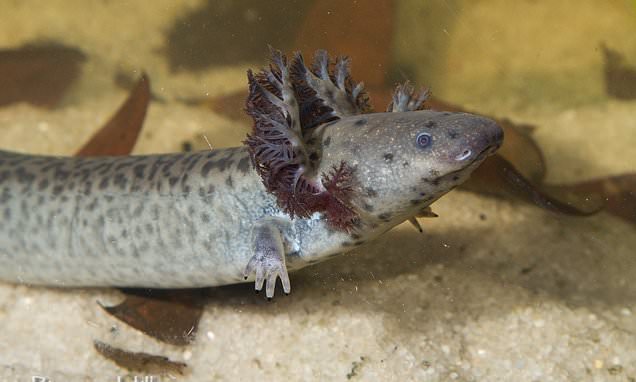 5 Responses to Parazoology Ba to Mn